… and apple haiku writing, which was my preserve.

It was all go on the apple haiku front! Visitors wrote a total of 42 haikus in 3 hours – which I work out to be about one haiku every 4 minutes! They were written in 4 languages (English, Italian, Spanish and French) by people ranging from a 4-year-old girl to a retired professor. Some haiku writers came from down the street, others from across the world, including as far afield as Minnesota, USA and Argentina! 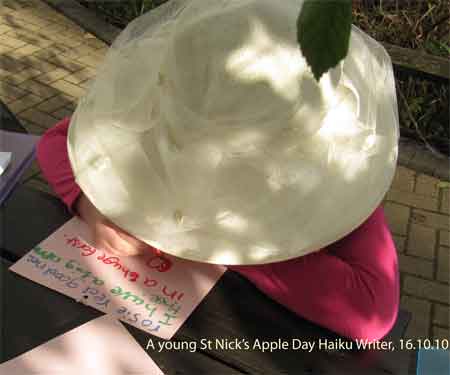 The highlight of the day for me was when my Mum was announced the winner of the prize for the most beautiful apple pudding! Richly deserved!

It was great to see friends there from our local Fulford Community Orchard, with an array of  jams and chutneys made from the orchard’s apples,  plums and pears.

Congratulations to all haiku writers (most of whom were complete novices), and to everyone at St Nick’s (especially Ivana) for putting on such an enjoyable and worthwhile event.

If you fancy some community haiku writing for your event, email me!

This site uses Akismet to reduce spam. Learn how your comment data is processed.