The amazing New Networks for Nature is bringing its Nature Matters symposium to York this year – and it’s looking like an amazing line-up of speakers and events! I’m very proud to be one of them.

‘Nature Matters is an annual three-day creative celebration of nature in words, music, film, photography, art and debate. Our delegates are treated to an inspiring programme of talks, readings, performances and discussions from leading voices and emerging talents, all of whom share tireless dedication to the natural world. The event is also about people, and offers a unique opportunity to meet and forge connections with like-minded individuals in a warm and informal atmosphere.‘

This year’s theme is ‘Time for Nature’ and it takes place from Thursday 31 October to Sunday 3 November at St Peter’s School in Bootham. It’s going to be quite a treat!

Grab your tickets now – and I’ll see you there!

And there’s music too, including Peter Cowdrey’s Planet Birdsong, the spellbinding voice of Kitty Macfarlane and, for the first time, a full length gig by folk singer and naturalist Sam Lee celebrating the launch of his new album, Old Wow.

The 2019 event is co-curated by nature writer Amy-Jane Beer and writer and Features Editor at BBC Wildlife magazine, Ben Hoare.’ 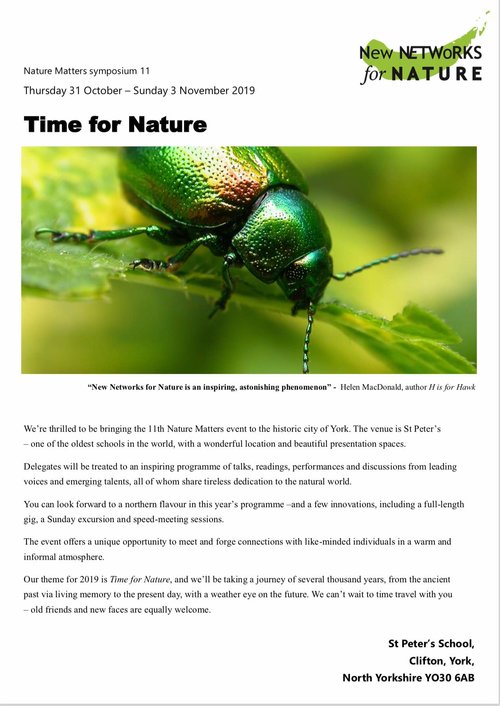 In celebration of the event coming to York, there’s even a special Tansy Beetle mural being painted by ATM Streetart as I type near the station in York. Check it out when next you’re passing that way!

This site uses Akismet to reduce spam. Learn how your comment data is processed.